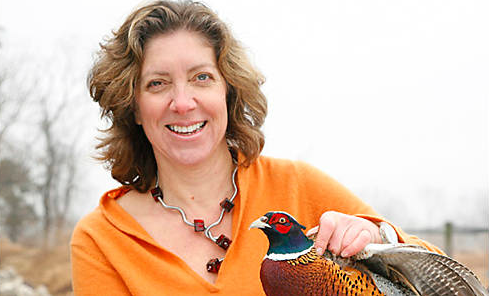 L’Academie Culinaire de France is proud to honor Ariane Daguin, founder and owner of D’Artagnan, as its “Dame de l’Annee 2010.”

Ariane Daguin was born into a world of great food. Her father, André Daguin, is famous throughout France for his artistry with foie gras and other Gascon specialties. Ariane was expert at deboning ducks, rendering duck fat, preparing terrines and cooking the game birds her grandfather hunted by the time she was ten.

A career in food might have seemed natural, but Ariane decided to pursue an academic degree at Columbia University. While working part-time for a New York pâté producer, Ariane was in the right place when the opportunity to market the first domestically produced foie gras presented itself.  She and a co-worker pooled their financial resources and love of food to launch D’Artagnan as the only purveyor of game and foie gras in the U.S. at the time.  Devoted advocates for natural, sustainable and humane production, Ariane and D’Artagnan have been at the forefront of the organic movement in America, pioneering organic, free-range chicken (years before the FDA allowed the word “organic” on the label), and humanely raised veal.

The creation of D’Artagnan coincided with a growing sophistication in American cuisine.
According to Jean-Georges Vongerichten, “D’Artagnan changed food in America by introducing high quality products to the American market, items Americans weren’t familiar with like foie gras, game and wild mushrooms.  The emphasis has always been on organic products and free range as well.  As chefs, we can only create great food with great ingredients, something D’Artagnan has always supplied us with.”

In 2005 after two decades of collaboration, Ariane acquired her partner’s share of the company to become sole owner.  Now, five years after that momentous decision, Ariane is proud to celebrate the 25th anniversary of D’Artagnan in 2010.

In addition to running D’Artagnan, developing new products and researching innovative and ecologically responsible methods of production, Ariane is founding president of Les Nouvelles Mères Cuisinières, an international association of prestigious women chefs, and she is on the board of City Harvest. Recognized in 1994 by The James Beard Foundation “Who’s Who of Food and Beverage in America,” Ariane is now a member of the Awards Committee.  In 2005, Ariane received the “Lifetime Achievement Award” from Bon Appetit magazine, and in September 2006, was awarded the French Legion d’Honneur.  She lives in New York City with her daughter Alix, who grew up alongside D’Artagnan.